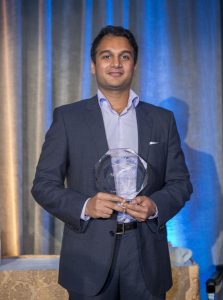 Honored and privileged to have been chosen as the Information Security Executive of the year 2017. The awards ceremony and the winners for the executive of the year and security project of the year were announced at an Awards Gala on August 23, 2017 at the Westin St. Francis in San Francisco, CA.

For over a decade, the West ISE® Awards recognize nominees from Alaska, Arizona, California, Colorado, Hawaii, Idaho, Montana, Nevada, New Mexico, Oregon, Utah, Washington and Wyoming. Nominations are sent to T.E.N.’s distinguished panel of ISE® judges for review and scoring.  The winner is announced publicly on the evening of the awards.

“We applaud the ISE® Award Executive nominees for demonstrating regional distinction in their career achievements,” said Marci McCarthy, CEO and president, T.E.N. “Being judged worthy of an ISE® Award demonstrates a lifetime of success in the field of IT security.”

About ISE® Award Program Series
For more than a decade, the Information Security Executive® (ISE®) of the Year Award Program Series has empowered security executives and their project teams to Connect, Collaborate and Celebrate. Recognized as the industry’s most prestigious IT Security award program, it has become the most anticipated award program for security executives and their project teams. Winners have included executives and project teams from leading organizations such as Nike, The Walt Disney Company, the United States Postal Service, Schlumberger, Texas Instruments, JPMorgan Chase & Co., Equifax, Comcast, PayPal, Northrop Grumman Corporation, and Nationwide.

Our distinguished ISE® Judges are past nominees representing a cross section of industries, including commercial, government, health care and academic sectors. For this reason, the ISE® Awards represent the best achievements of the year as evaluated by those regarded as the industry’s most influential and successful thought leaders. Coupled with a one or two-day executive summit, the ISE® Awards are held across the country and Canada in major cities including Atlanta, Chicago, Dallas, New York and San Francisco. The ISE® Awards Program Series has reached more than 10,000 executives across a broad range of industries and has been a major influence in executives’ careers, knowledge sharing, and the development of peer-to-peer relationships.